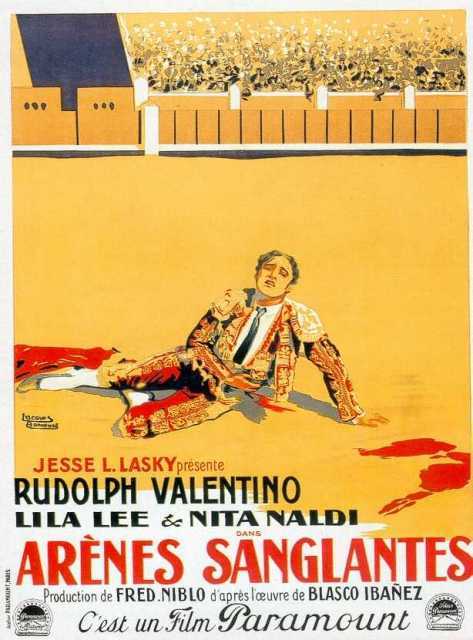 Synopsis (en Alemán)
A young matador, Juan Gallardo, marries Carmen, his childhood sweetheart, while achieving fame throughout Spain. He is happy but succumbs, nevertheless, to the passionate charms of Doña Sol. Carmen accepts the situation but comes to nurse Juan when he is gored. Though his skill has diminished, he refuses her pleas that he quit the bullring; and he meets disaster when, distracted by the sight of a handsome young stranger with Doña Sol at a bullfight, he fails to defend himself from the first charge of the bull. Juan dies in Carmen's arms, in the sound of cheers for a new hero, after assuring her that she has always had his love. (In another version Juan recovers and gives up both bullfighting and Doña Sol for good.) (Turner Classic Movies)

Sangre y Arena is a motion picture produced in the year 1922 as a Estados Unidos production. The Film was directed by Fred Niblo, with Rudolph Valentino, Lila Lee, Nita Naldi, George Field, Leon 'Vader' White, in the leading parts. There are no reviews of Sangre y Arena available.